Near Vela Luka, Korcula islandSleeps: 8From €2450 per week 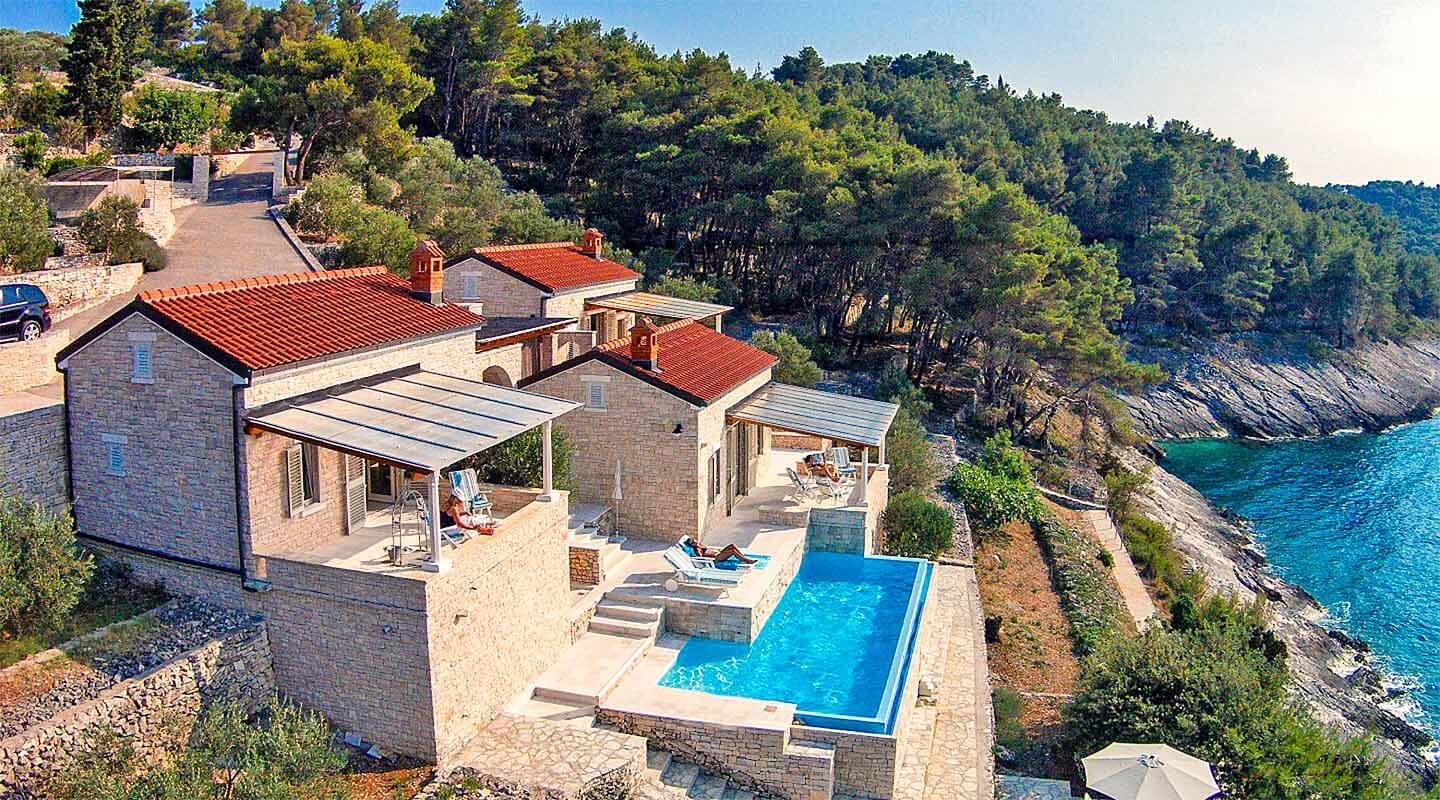 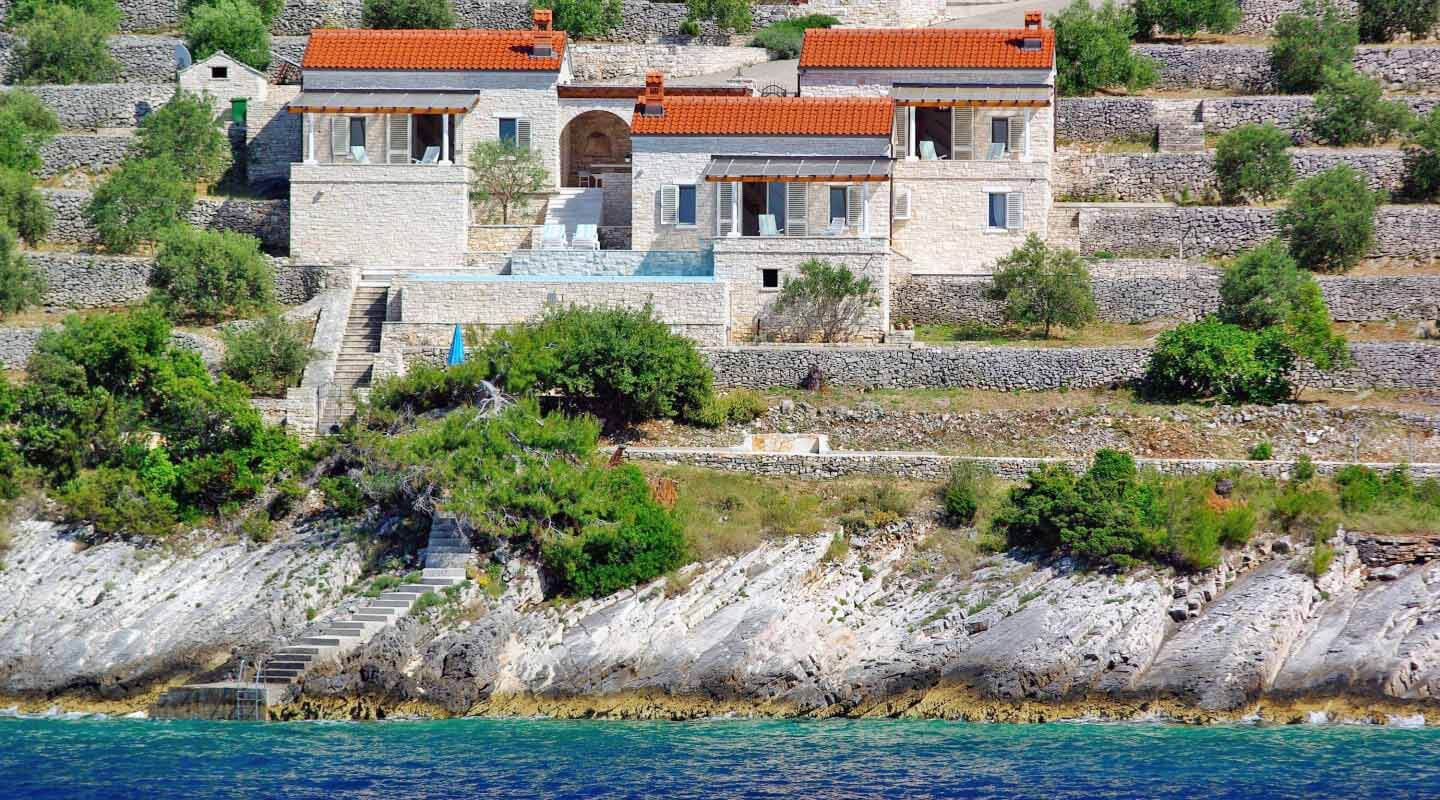 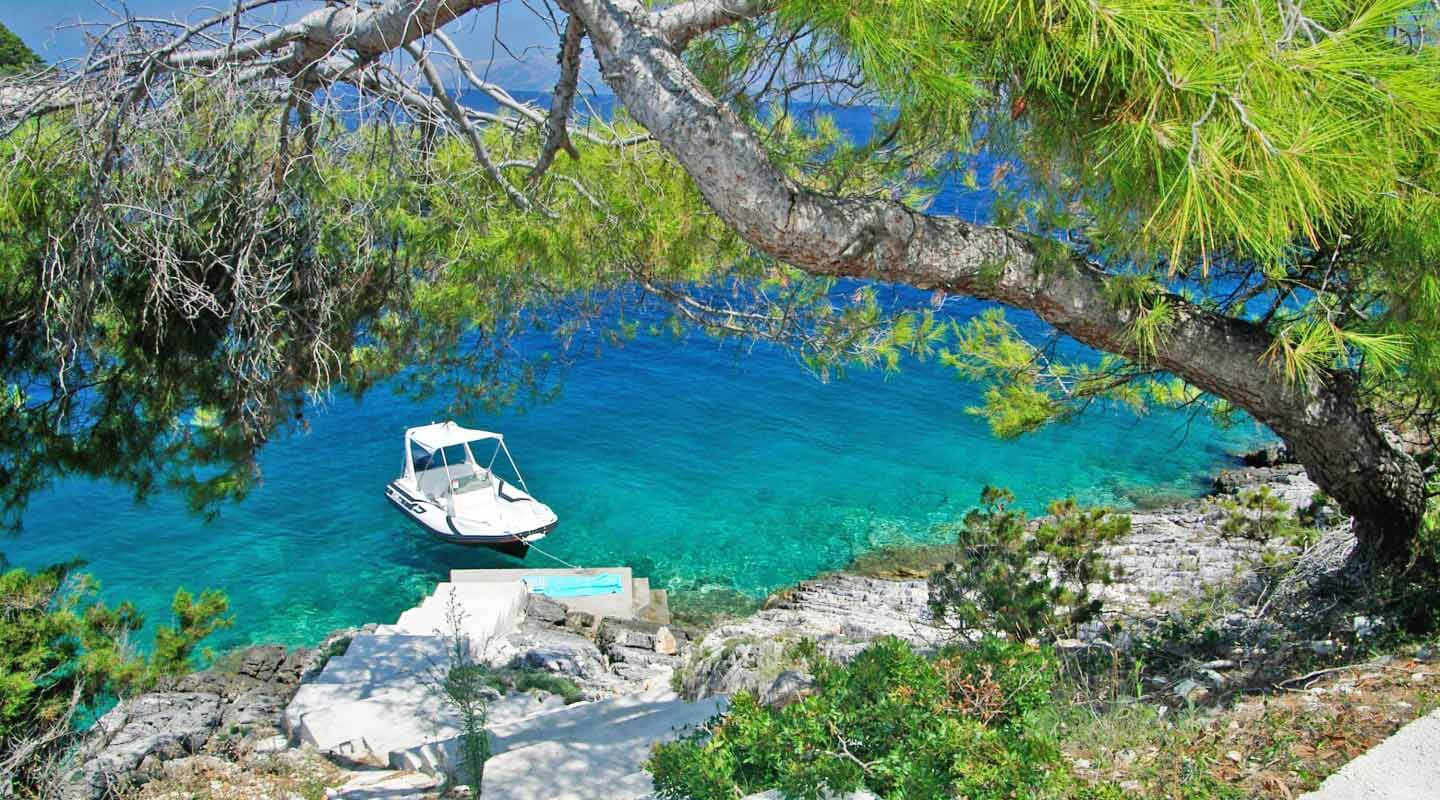 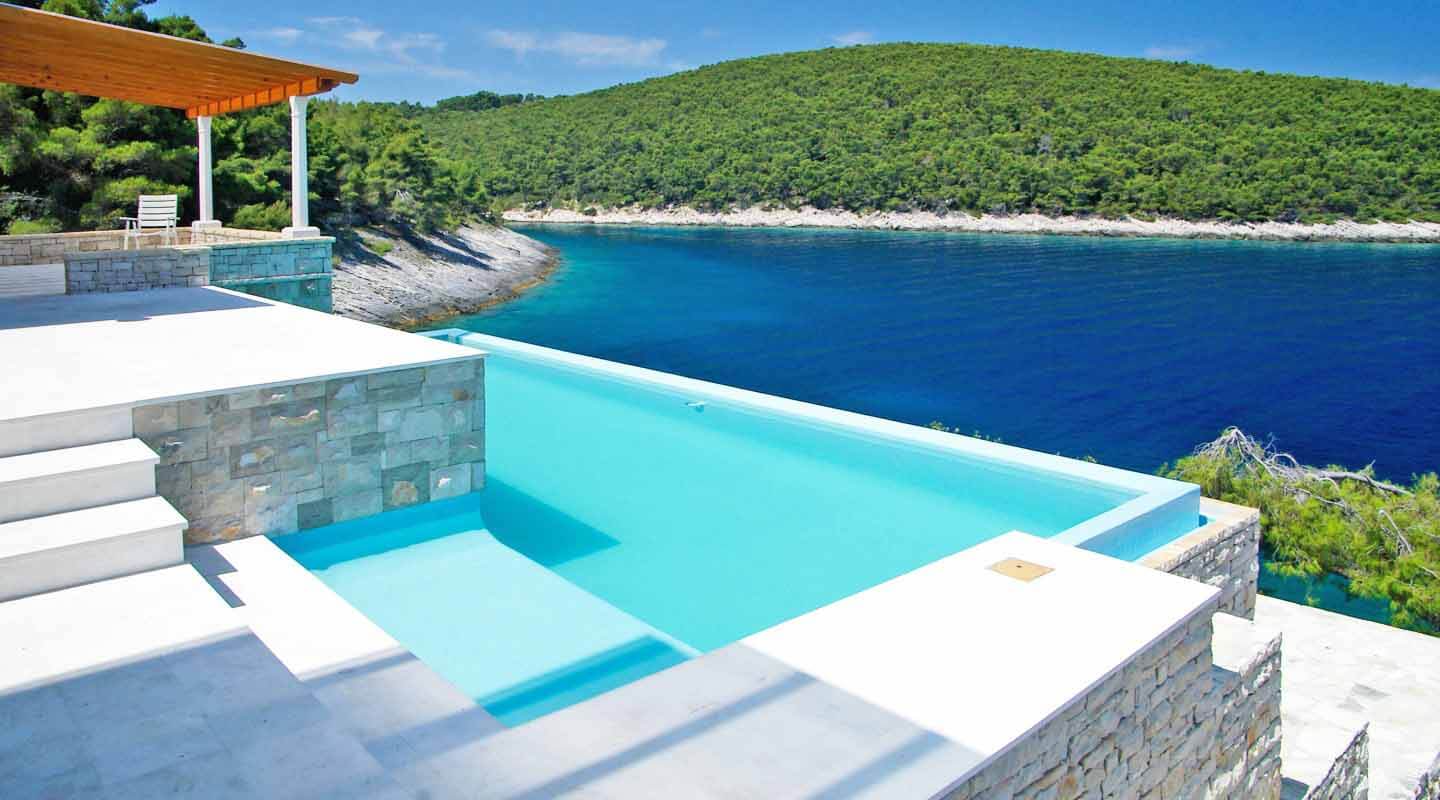 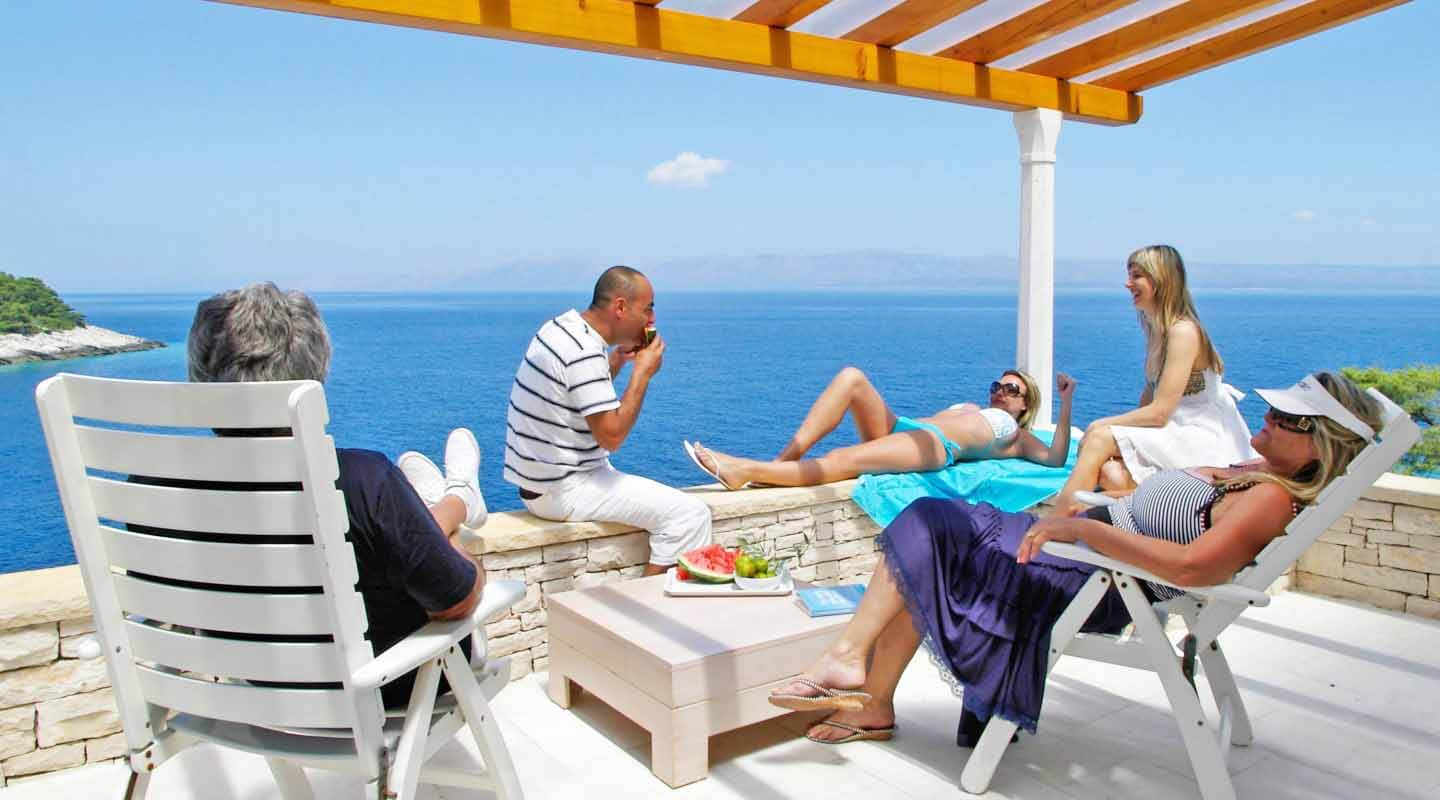 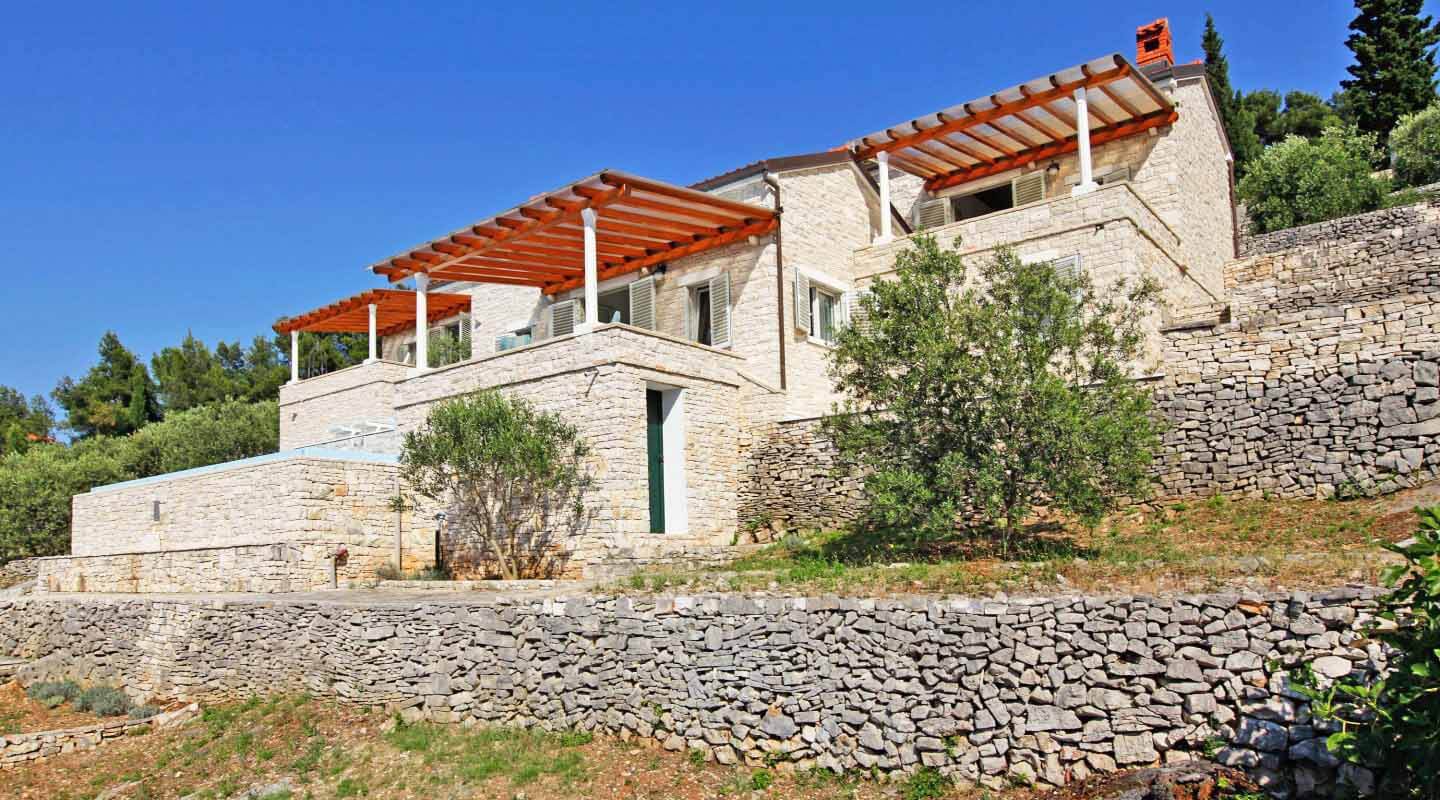 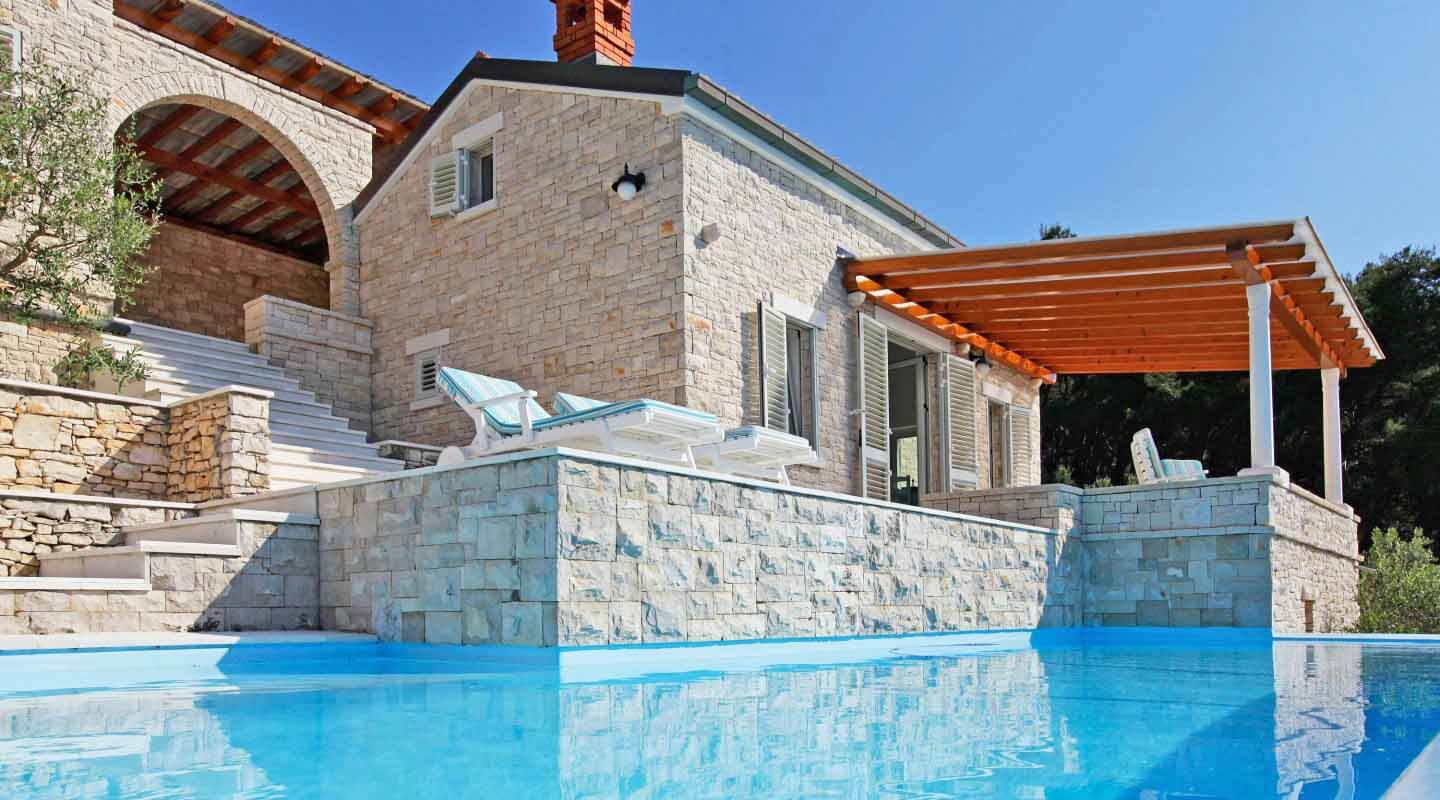 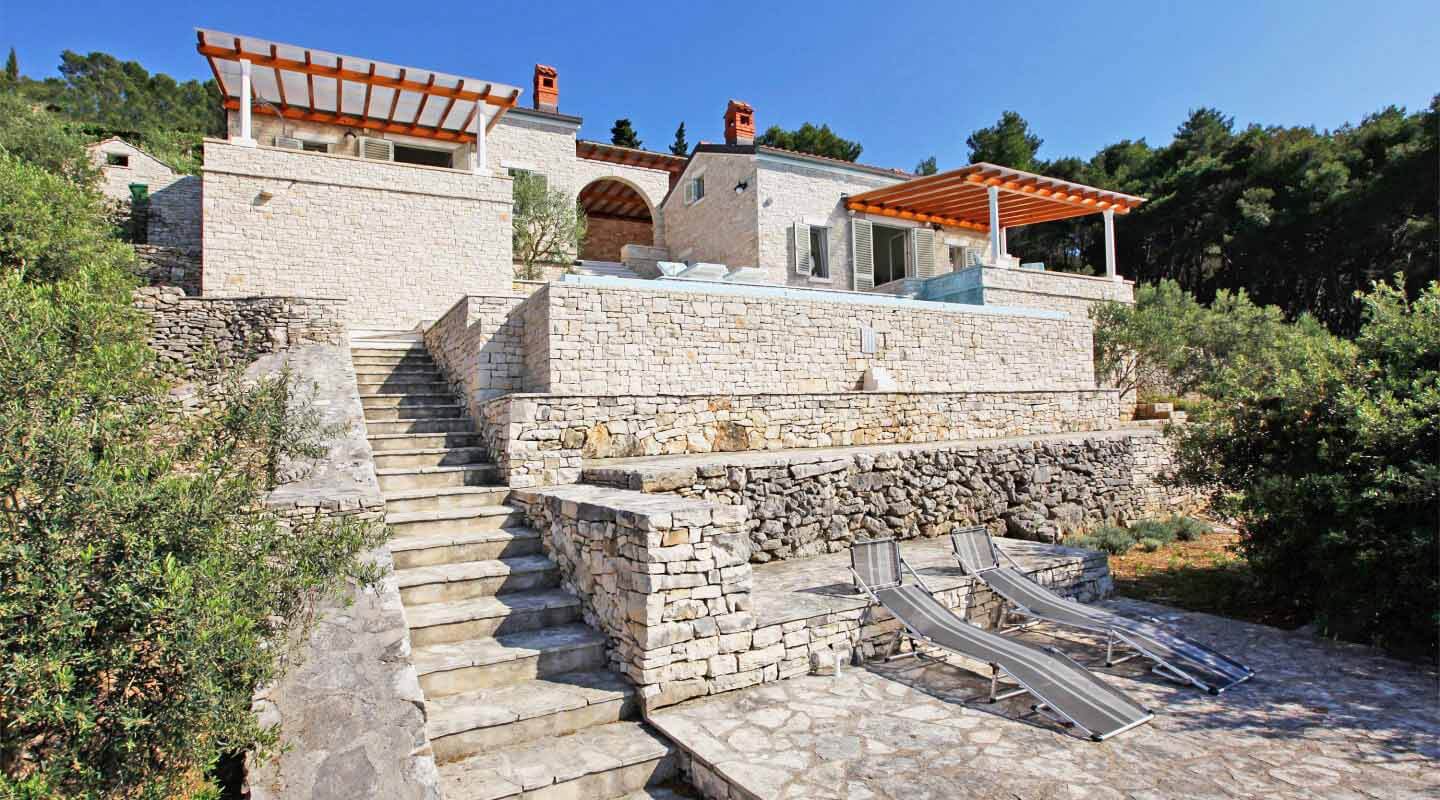 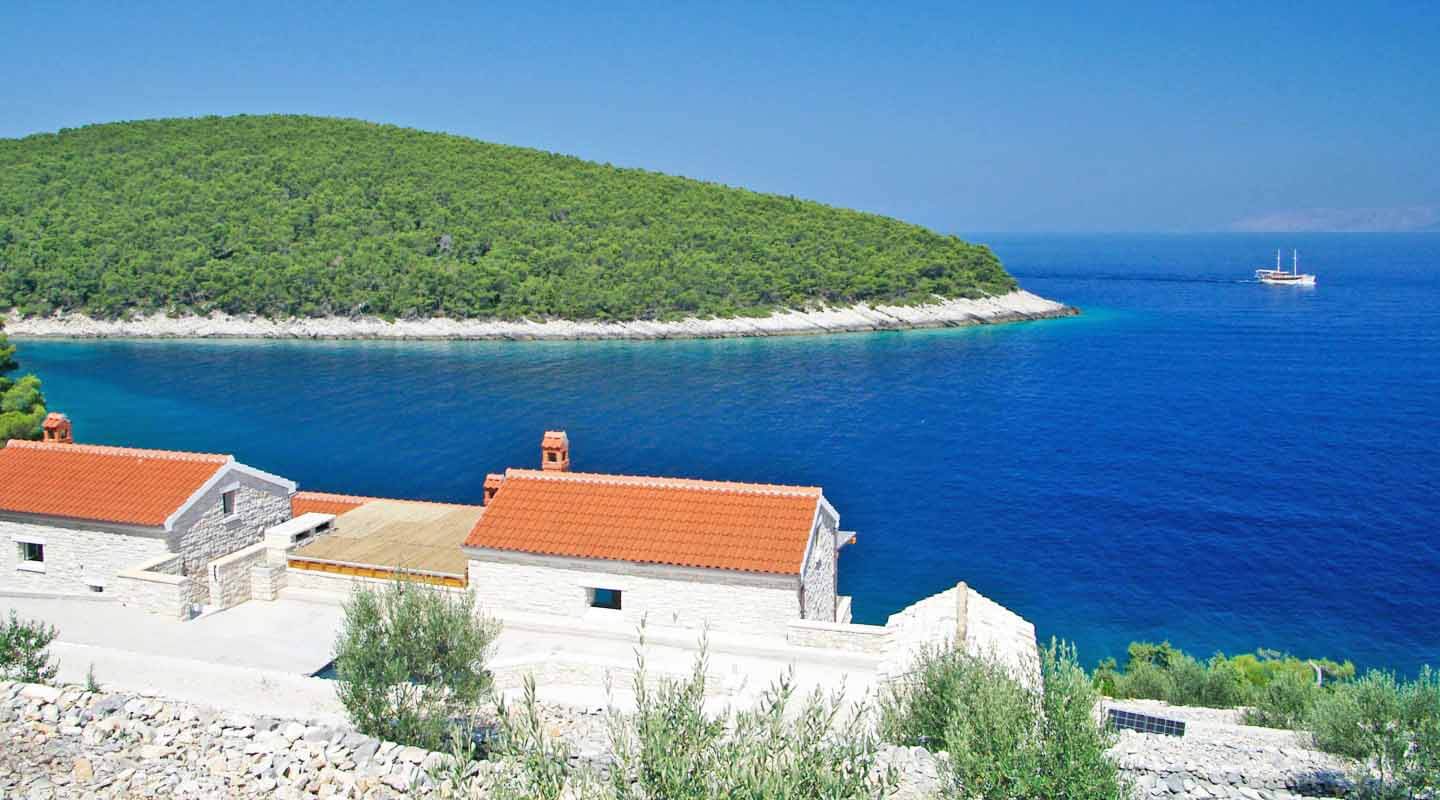 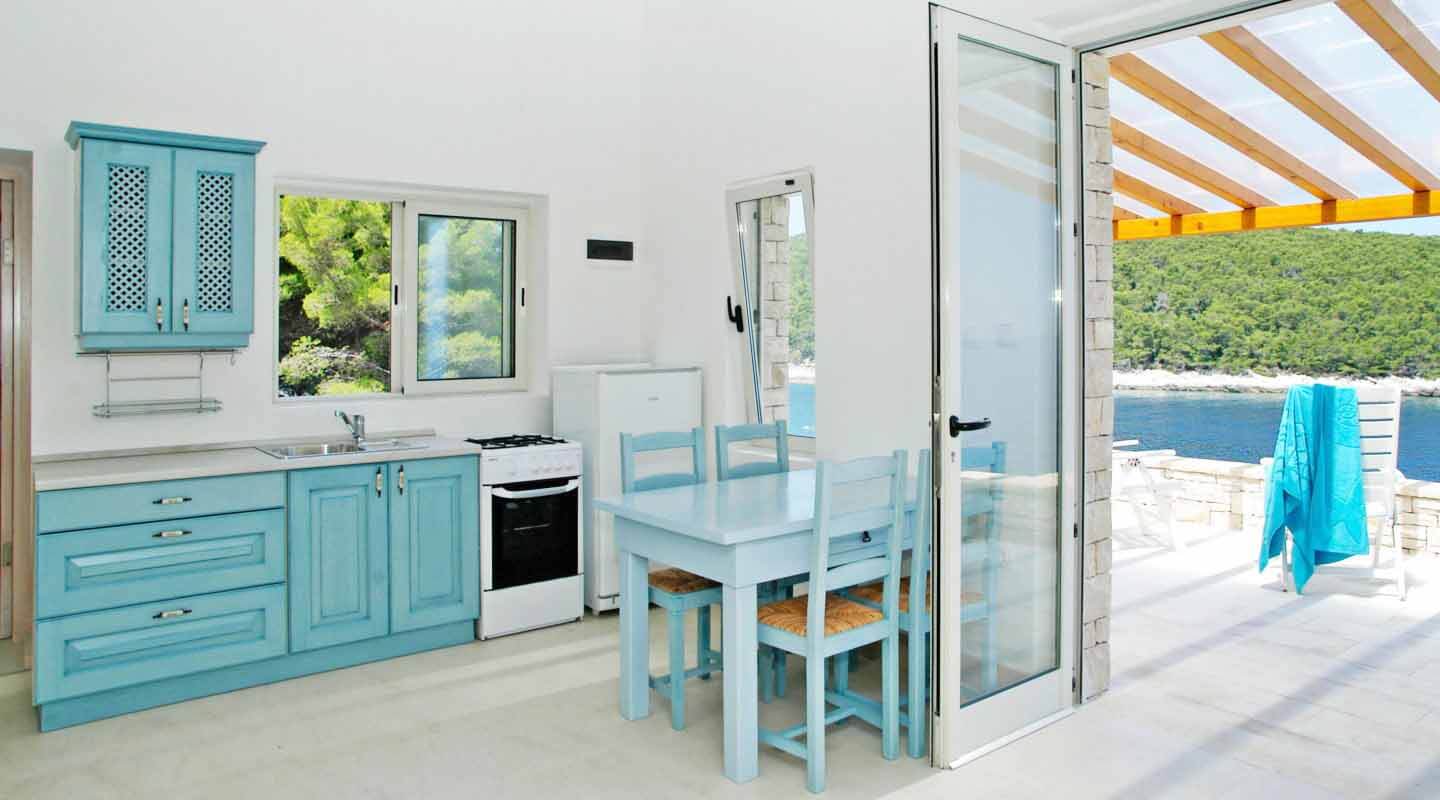 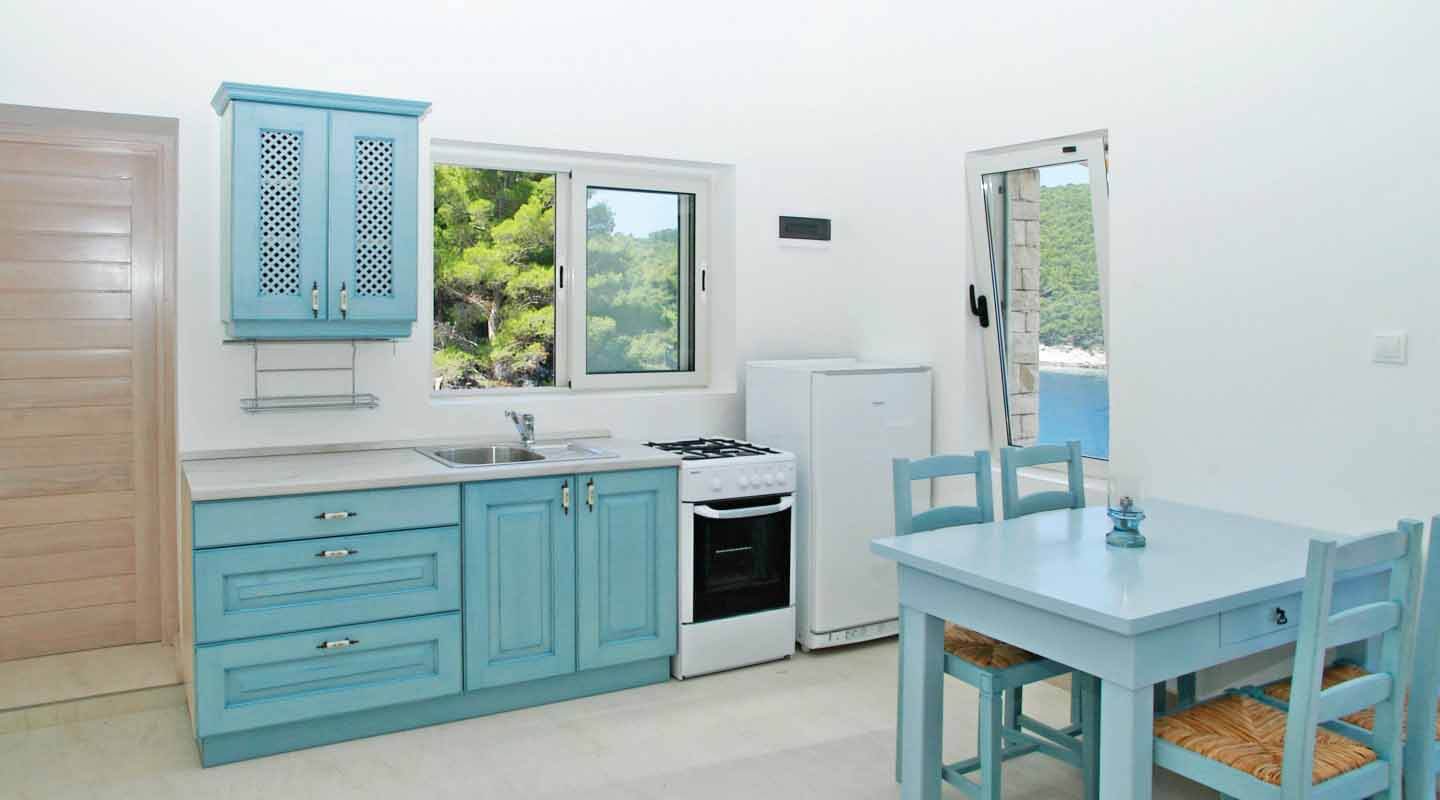 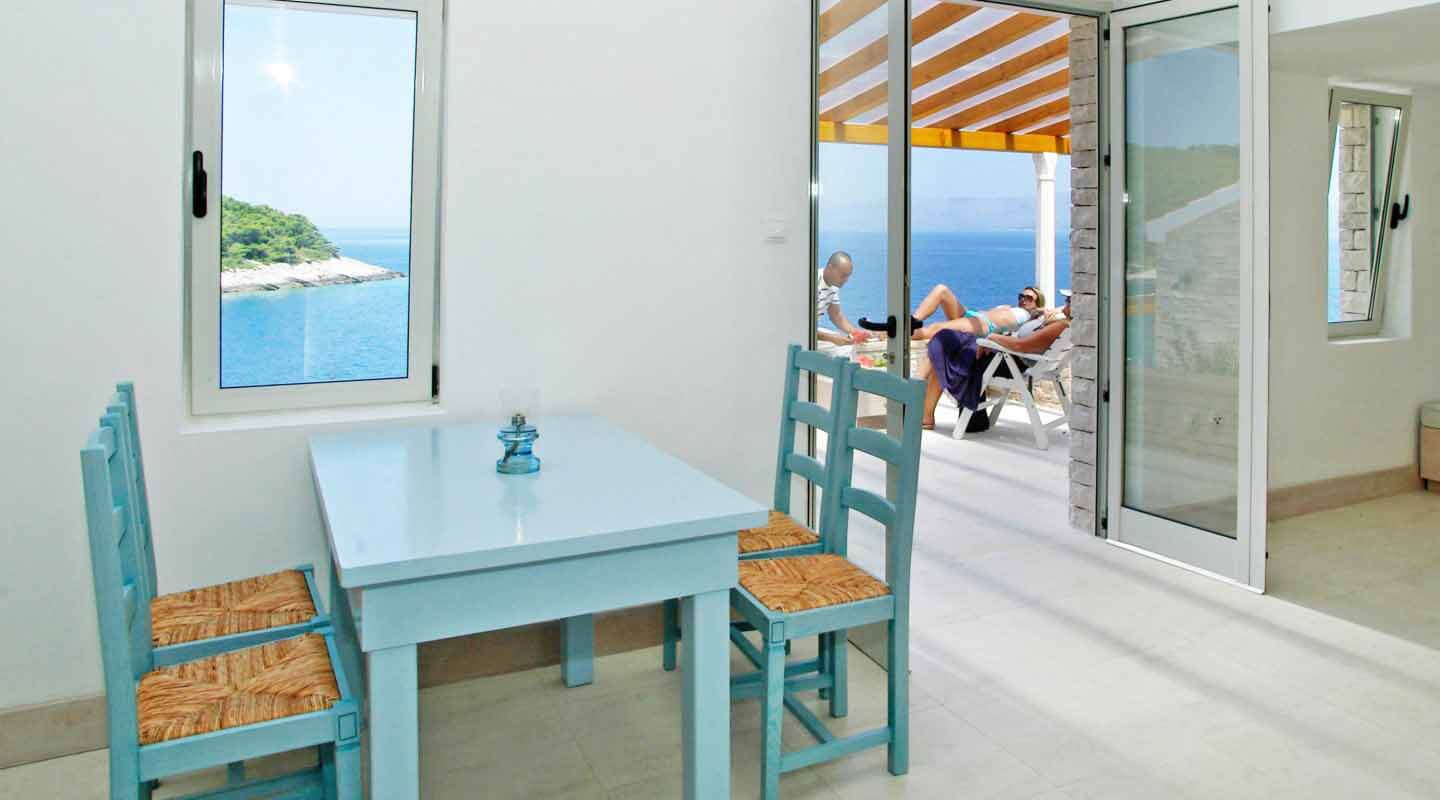 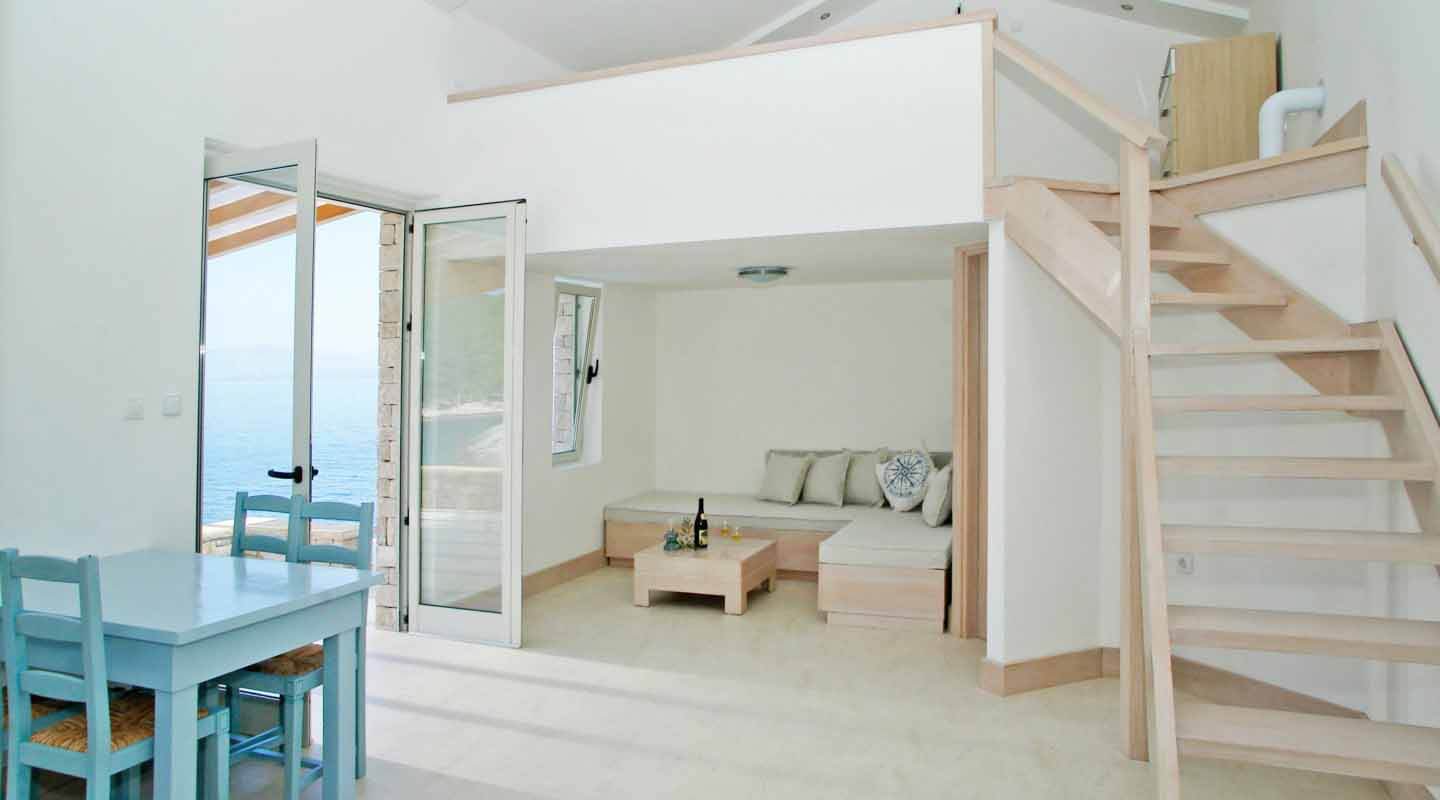 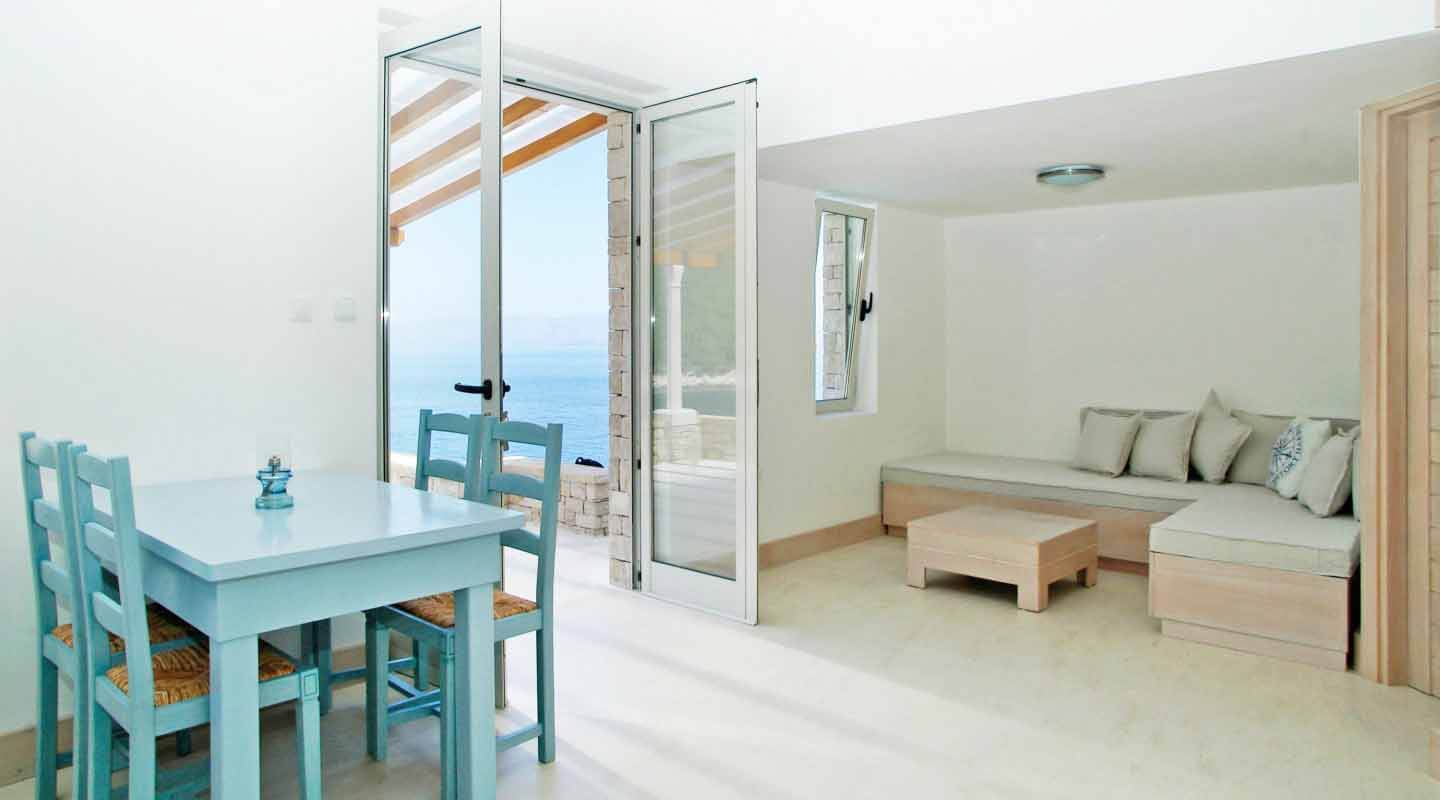 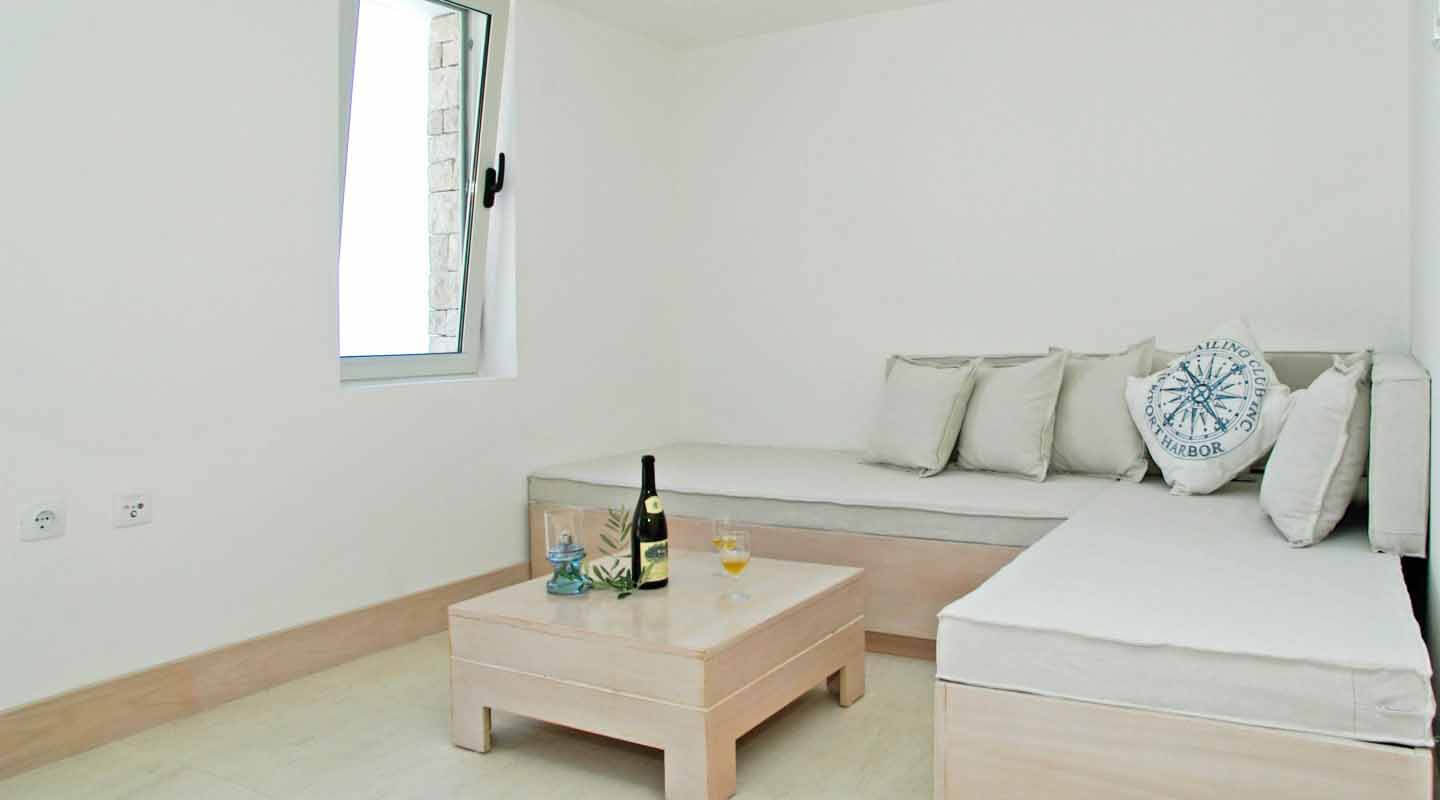 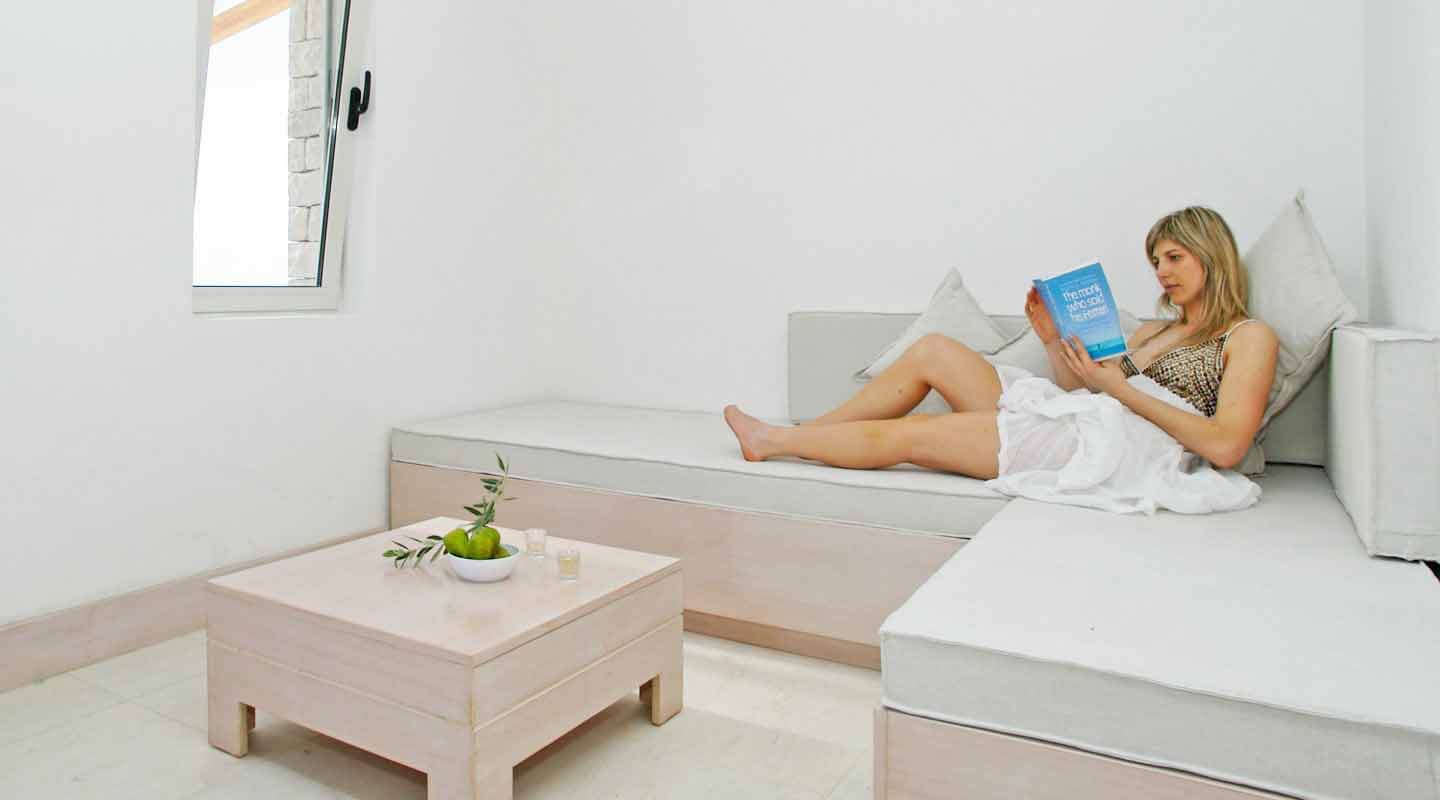 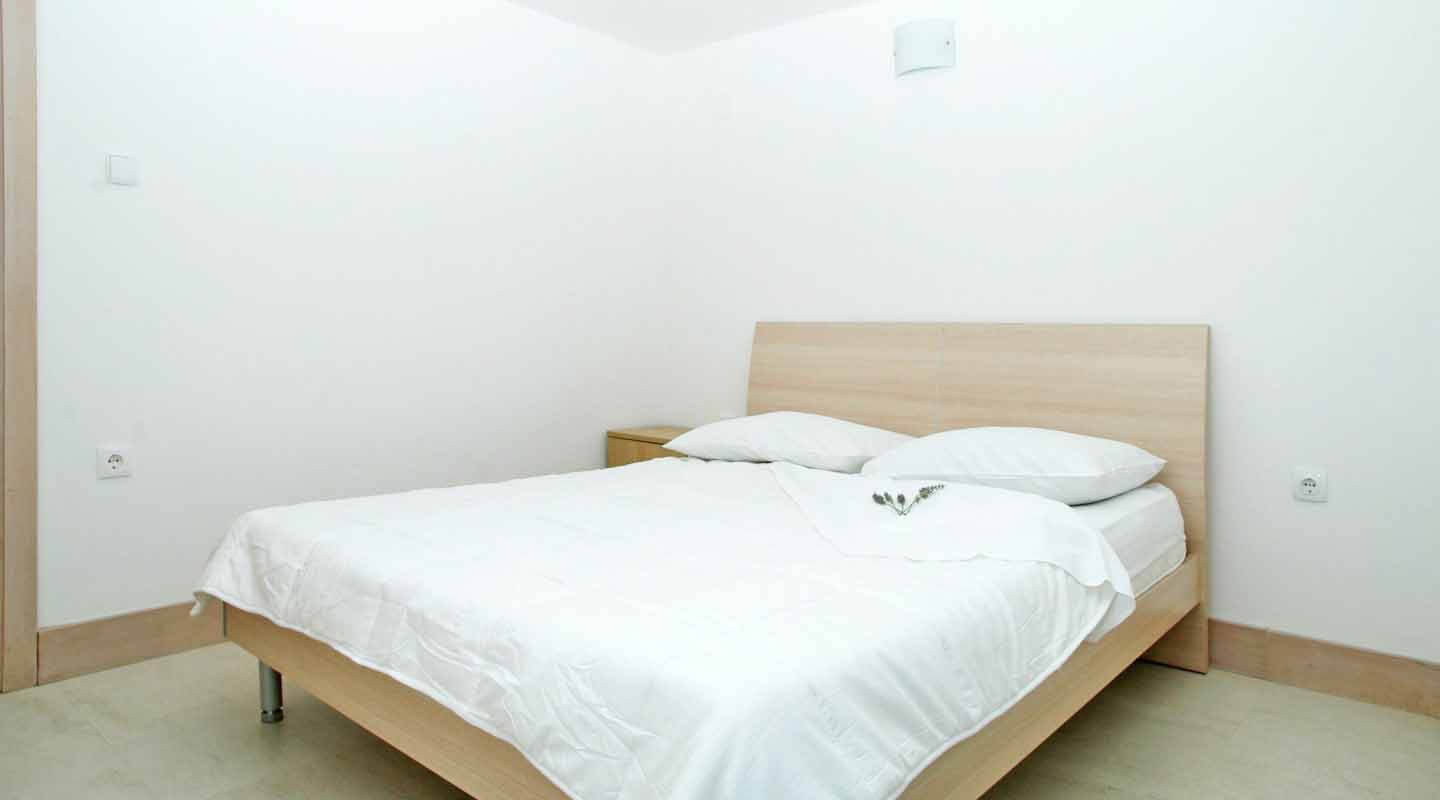 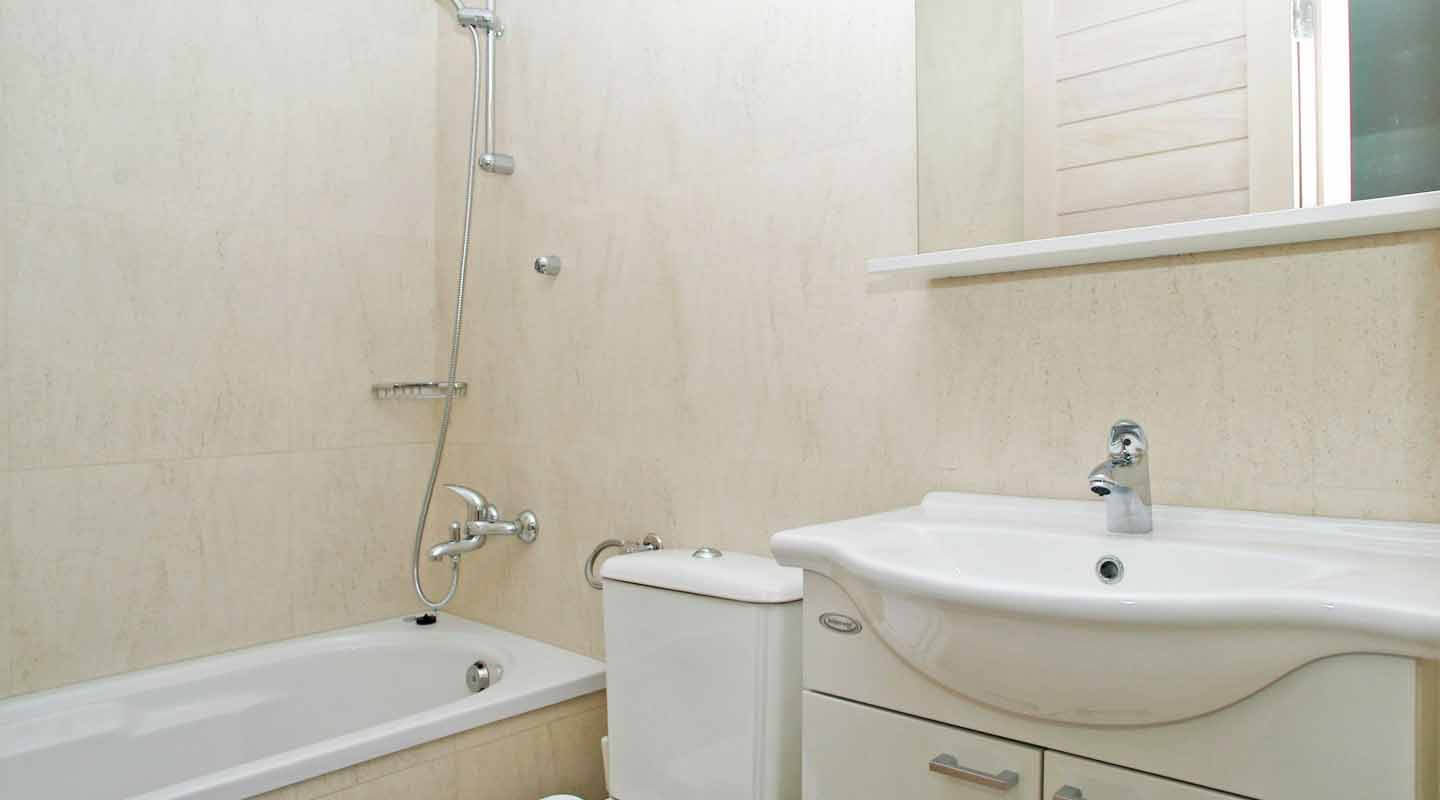 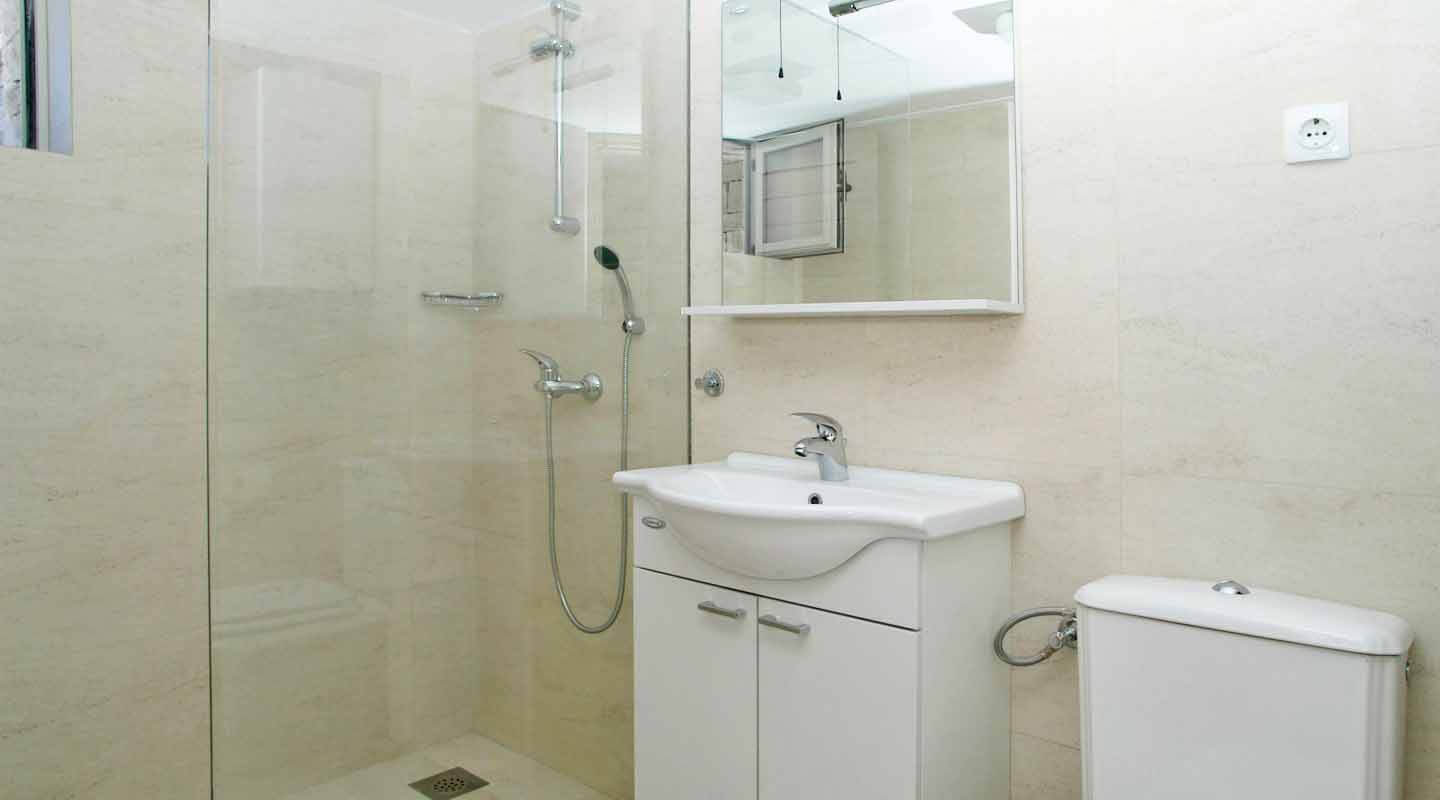 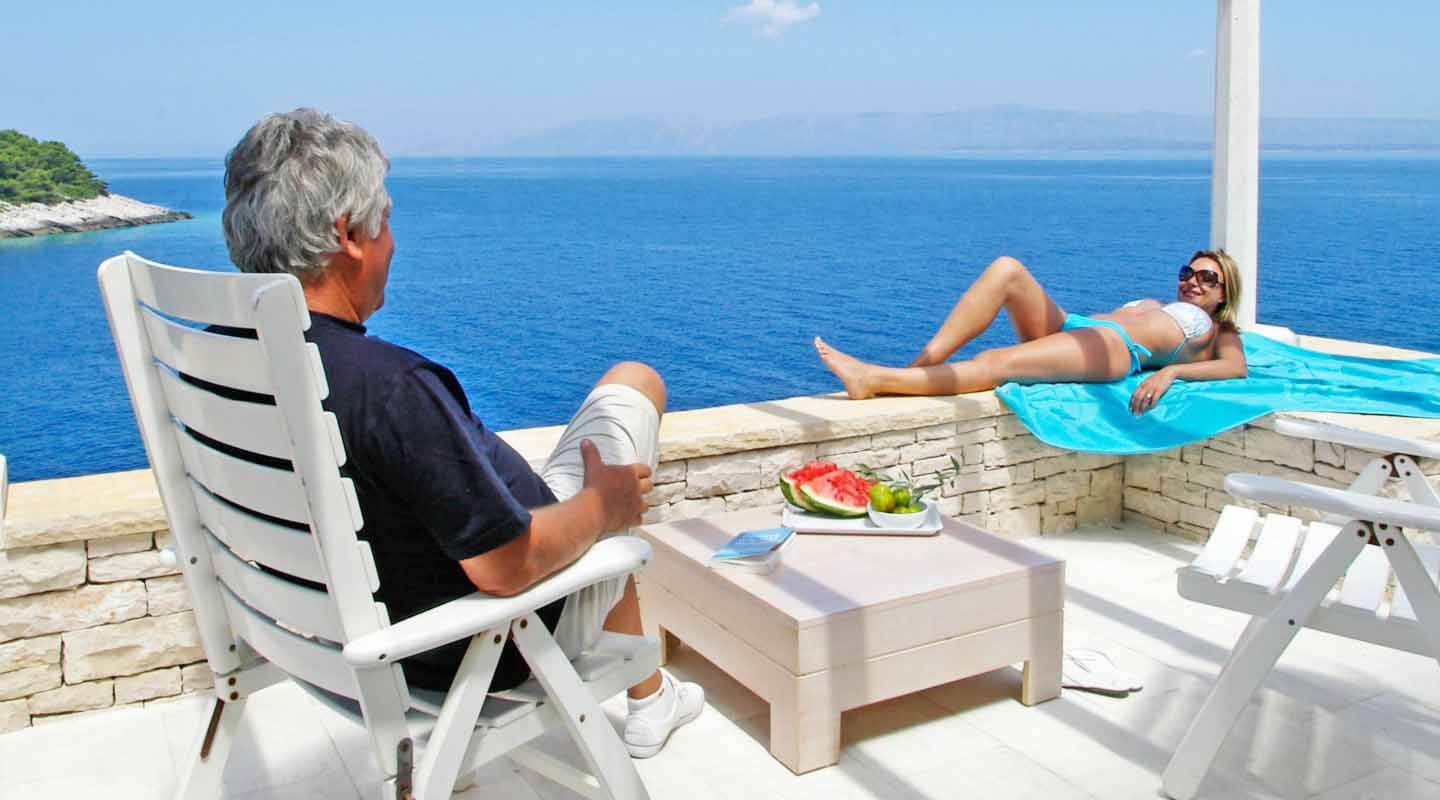 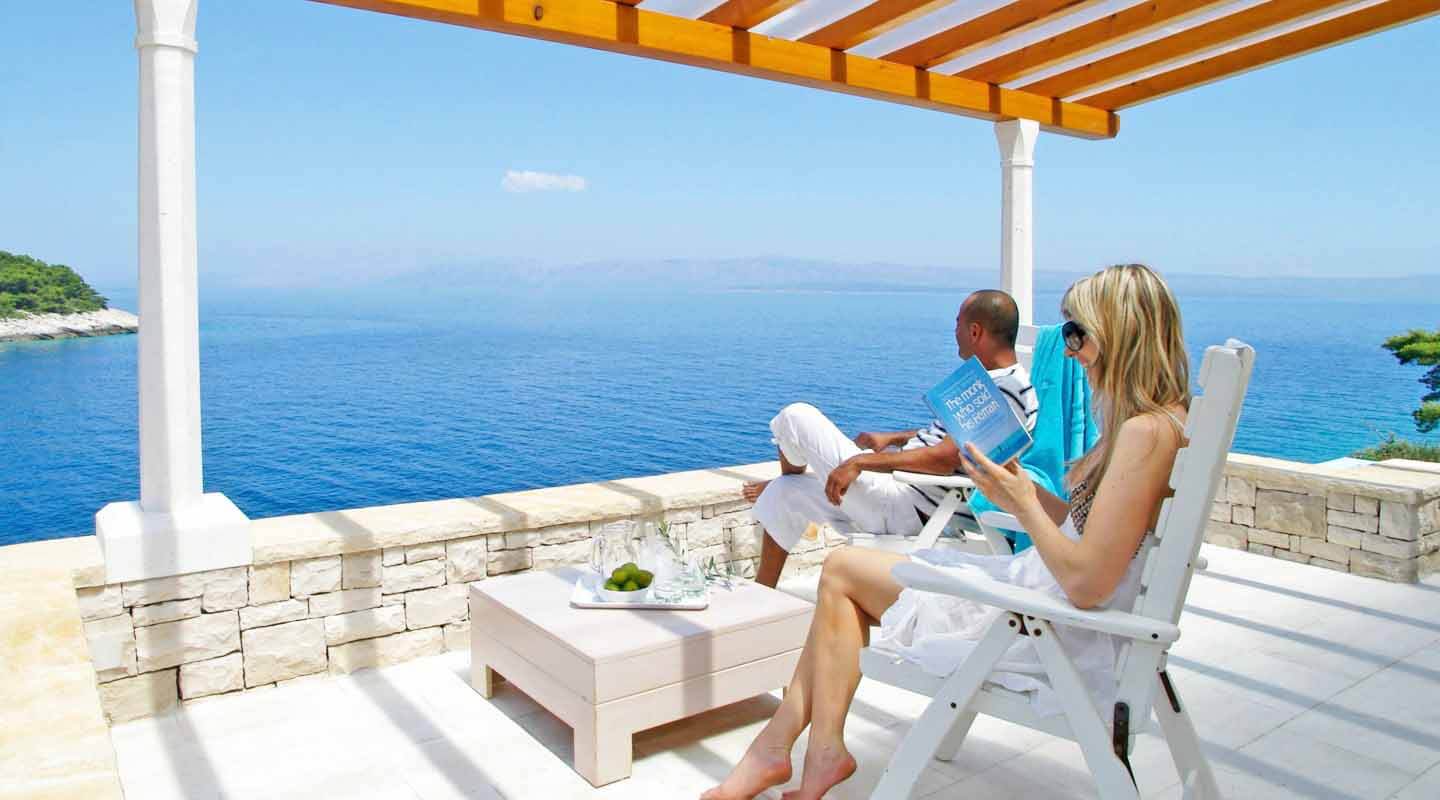 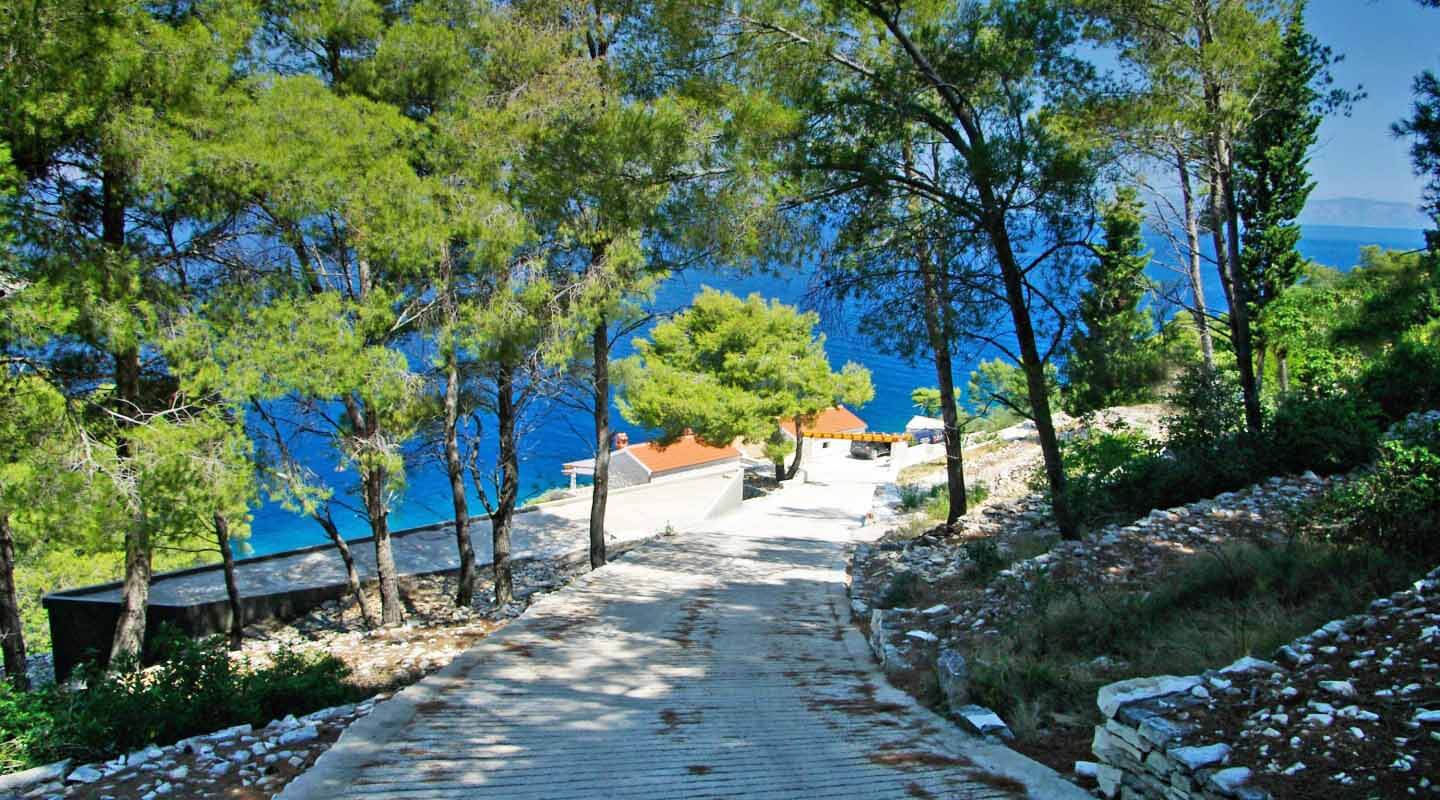 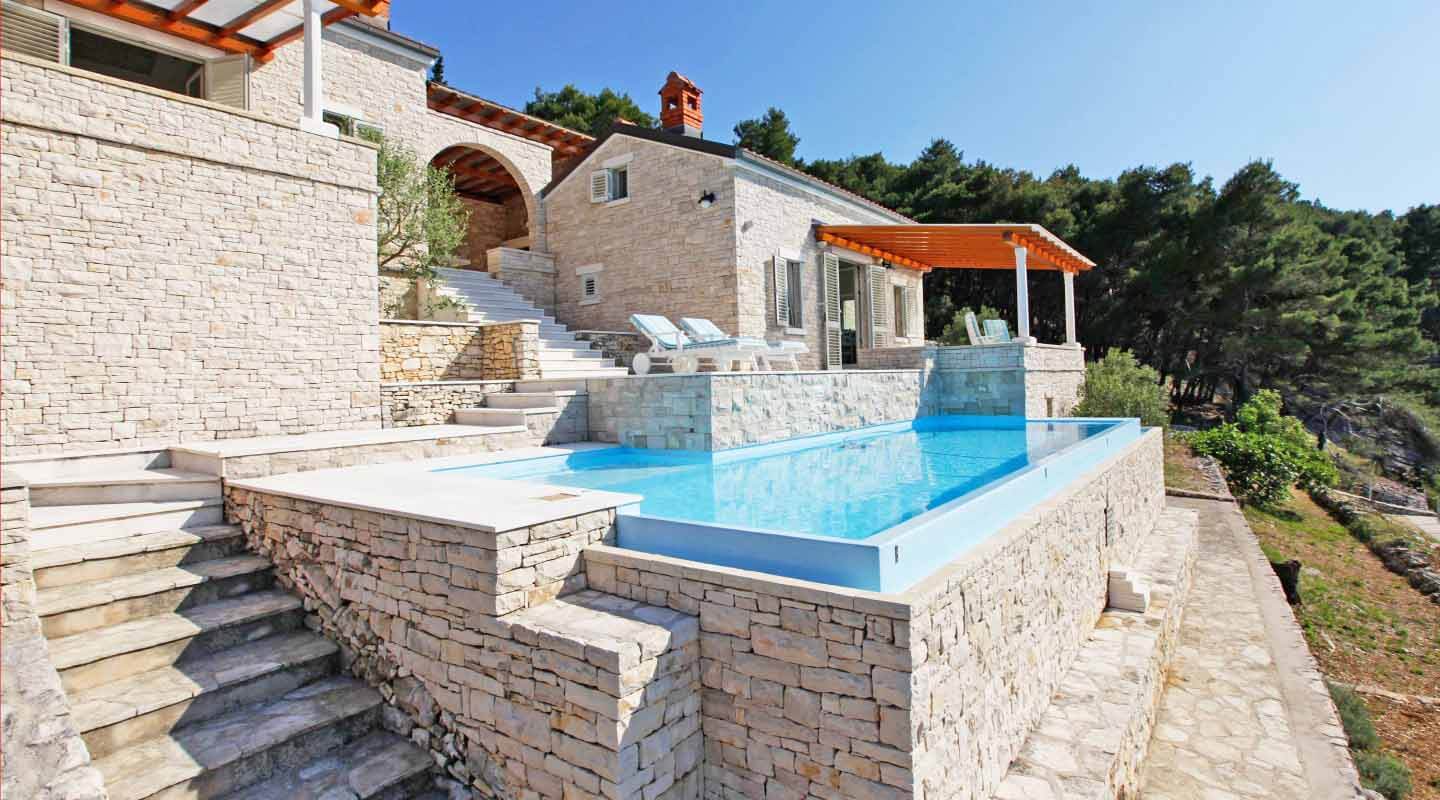 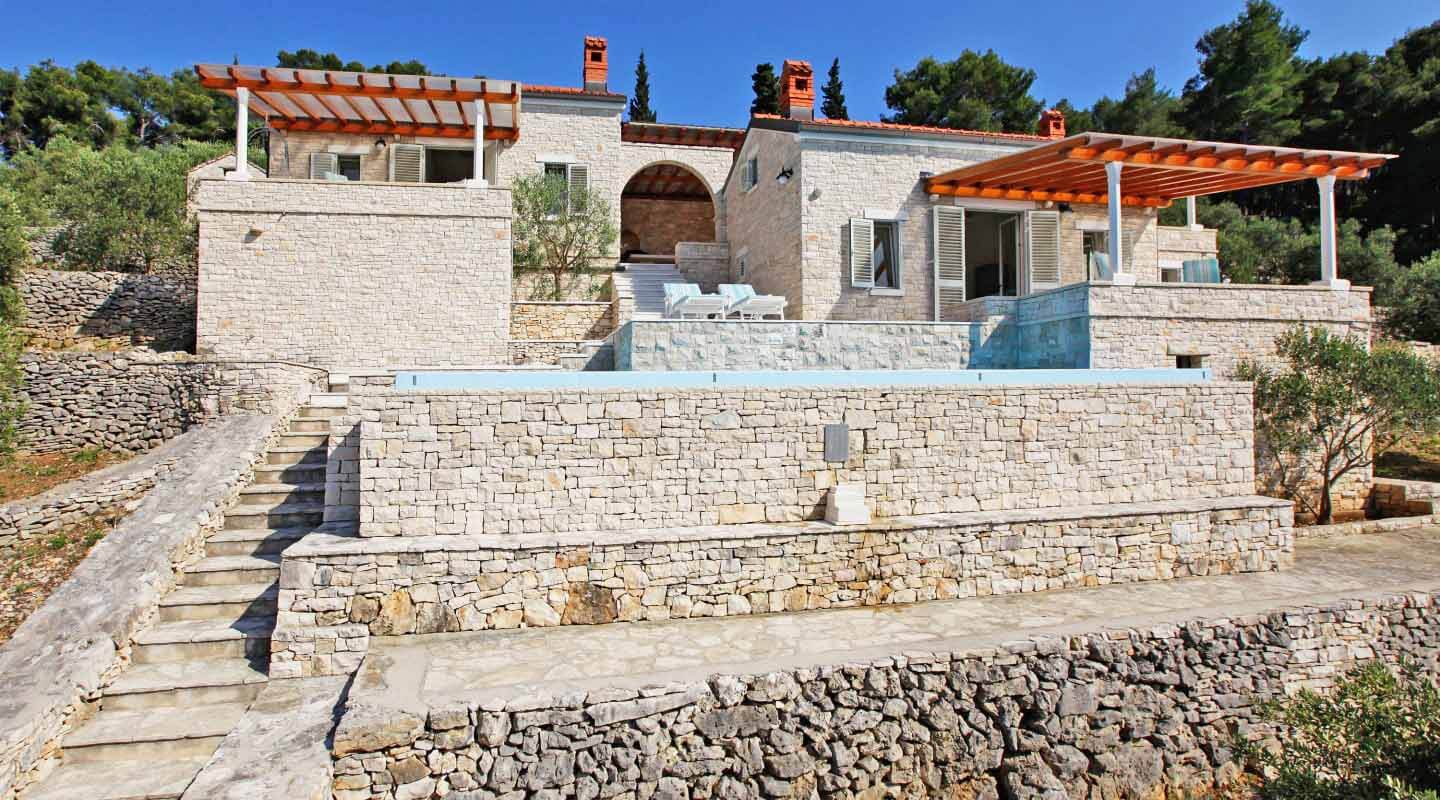 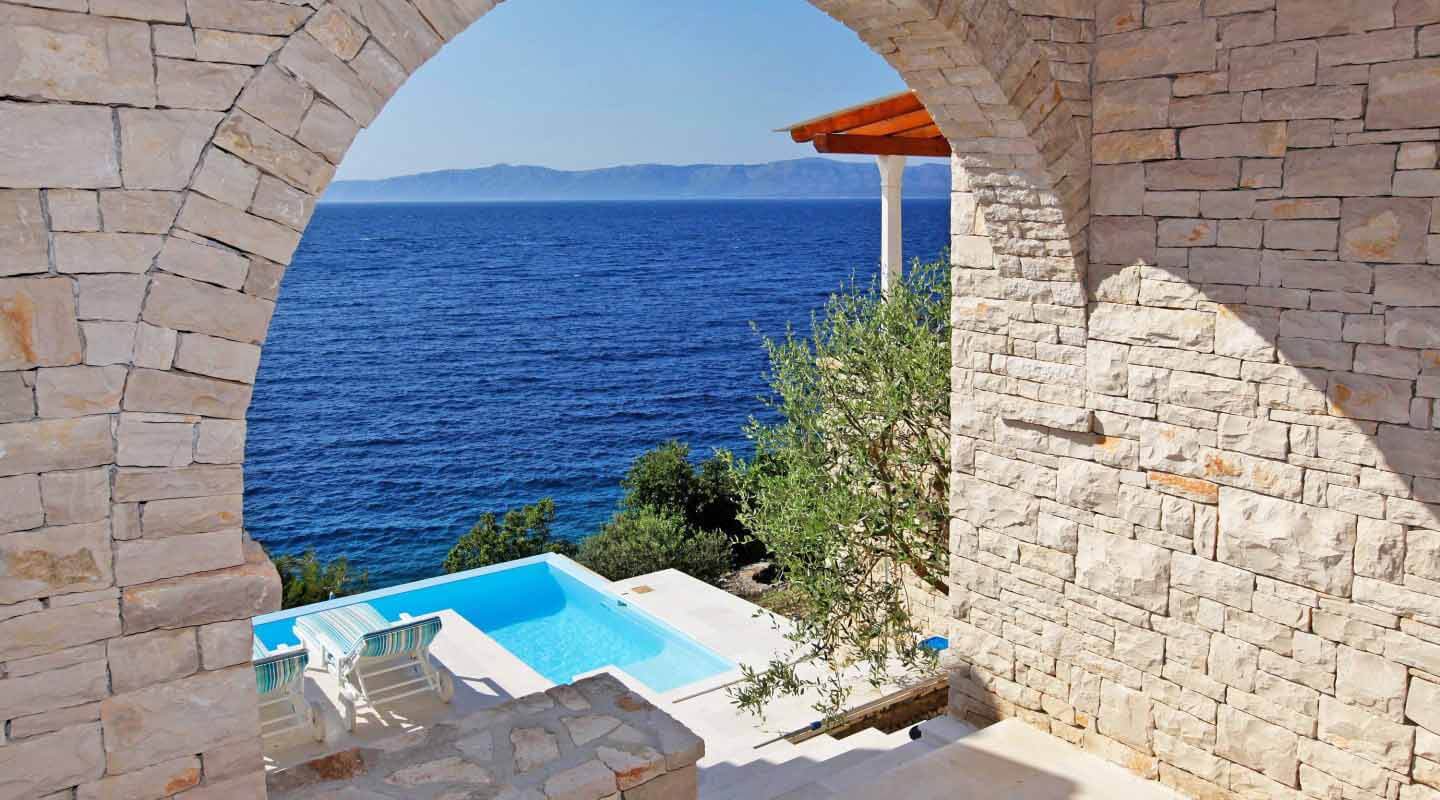 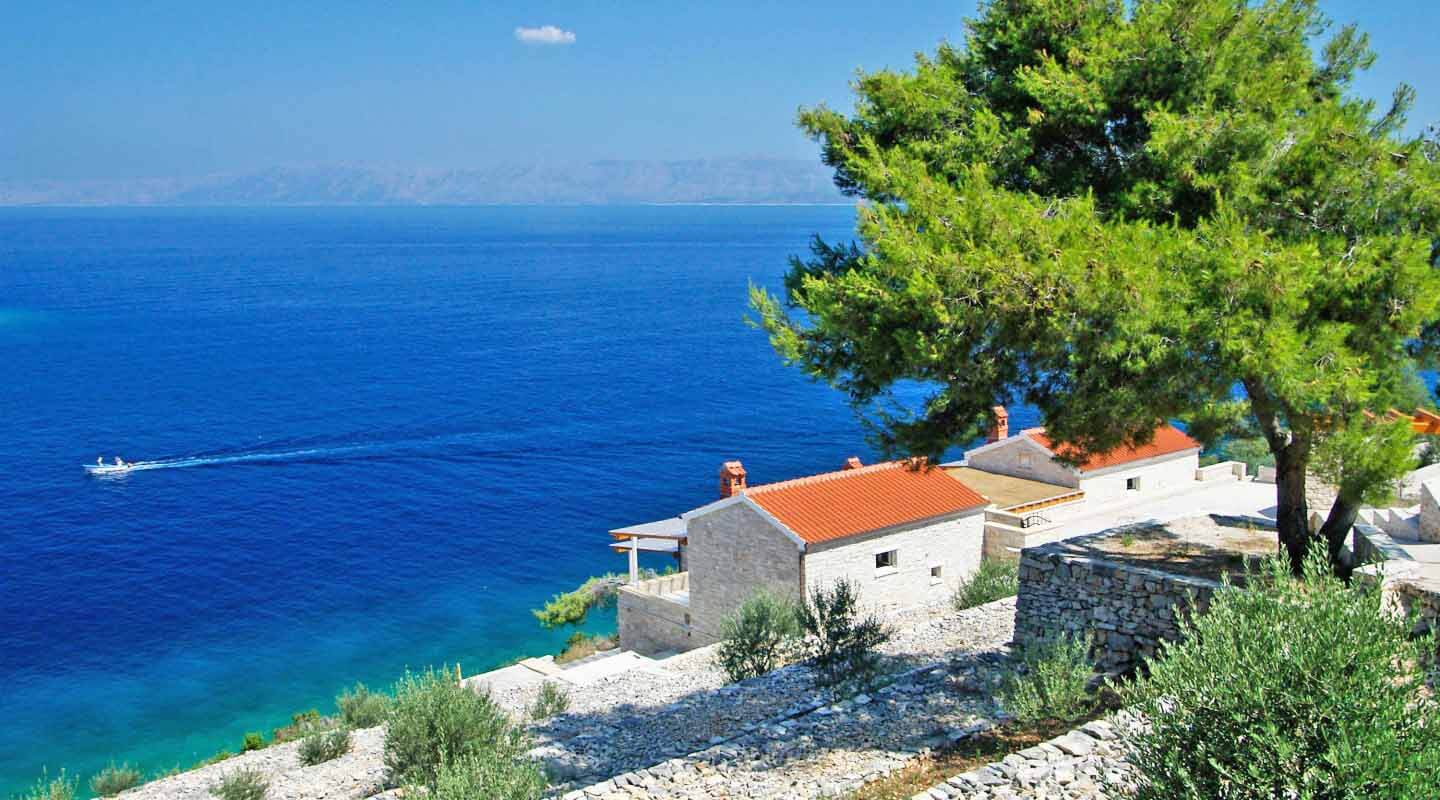 “ You want to get away from it all but with a private sea frontage? This is for you. Stone cottages with modern interiors. 5km from Vela Luka. “

All in all a great holiday and thank you for being helpful and answering my many questions.

The accommodation is priced in euros. Prices in £ or $ are indicative.
Currency: € ₤ $

The owner does not usually request a damage deposit.

Stays of less than 4 days possible during low season only, at a 30% surcharge. Please enquire.

To book this villa you need to select arrival and departure dates in the calendar below.
Send enquiry Book this villa

Three little fishermen's cottages are presented as one villa which comes with a swimming pool and its own private beach! The villa is in a rural location about 6 km from Vela Luka on the Korcula island, and sits on a 6000 sqm large plot, surrounded by terraces of about 100 olive trees and pine trees. Leading down to an unspoilt coastline and aquamarine sea, which is warm and safe to swim in. The three cottages are furnished and decorated in a common colour scheme of white and sea blue, with white stone floors throughout.

The electricity for these three cottages is produced from solar units that store solar energy in batteries. There are also four fans supporting the air flow on hot summer days.

Cottage One and Two

Each has a fully equipped kitchen with gas stove, refrigerator with freezer, cooking utensils, plates, glassware and a pale blue dining table seating four people. In the sitting area is a sand coloured corner sofa which can seat four to six people.  A lovely modern bathroom is on the ground level and a wooden staircase leads to a galleried bedroom with a double bed. From the living room area there is a door leading to a terrace where you can sit and enjoy the sea views.

A pretty courtyard and garden is made up of traditional terraces which are supported by old stone walls, and surrounded by 100 olive trees. There is a covered terrace with dining table and built-in barbecue. A wonderful infinity pool is built on a level which makes you feel as if you are merging with the sea when swimming. Often you will see fishermen's boats bobbing along looking for their catch. Around the pool are deck chairs and sun umbrellas, and an outdoor shower. Just a few steps down to the sea there is a private mooring for a small boat and a private pathway along the seafront of the property.

I loved the stylish simplicity of the villa
“ It was absolutely ideal for family group of 3 adult couples. Pool and proximity to sea was excellent. We rented paddle boards for the
week.
I loved the stylish simplicity of the villas.
The welcome snack was a mini feast and very much appreciated.
It was disappointing the oven did not work/ difficult to operate. (as discussed with owner) as this limited our options for cooking.
BBQ was good. ”

“ A little disappointed by local restaurants.
Loved walk/visit to Vela Spila and Gradina
A group enjoyed visit to Proscid island.
rented paddle boards were excellent. ”
Gillian,
We had a super holiday ...
“ We had a super holiday at Villa Stone Villa. The houses are well appointed and had everything they claimed in the brochure. One minor point: the safes did not work, but as there was nobody around, it did not matter. The owner from S. Africa appeared one day with an engineer to fix the one boiler that was not working.

All in all a great holiday and thank you for being helpful and answering my many questions.

Korcula island is midway between Split and Dubrovnik and can be reached from either airport although travelling via Dubrovnik offers greater flexibility due to frequency of ferry crossings.

If you fly to Split there will be several options open to you. All ferry departures are from Split ferry port (25 minutes from the airport but allow longer in busy periods). The only car ferry crossing is with Jadrolinja to Vela Luka, the town at the west end of the island of Korcula. The crossing takes two hours 45 minutes and in peak season there are two departures a day, mid-morning and late afternoon.  The cost for a car and a familyu of four with children over 12 years will be around €95 ech way. Jadrolinja also offers a daily fast catamaran service to Vela Luka for foot passengers that departs at 15.00 every day with a crossing time (via Hvar) of 2 hours 20 minutes. A ticket on the fast catamaran will be around €8 per head each way. Check timetables and prices on the Jadrolinija website or on the Korcula Info website. If there are severe storms check for delays or cancellations.

Croatian Villa Holidays can arrange car hire from Split airport or for pick up on Korcula island if you arrive by passenger ferry.

From Split the Kapetan Luka ferry company provide a daily catamaran foot passenger service departing Split each morning at 10.00am (but check times on the website) and arriving Korcula Town at the east end of the island, stopping at Hvar en-route, at 12.30pm. Kapetan Luka also provide catamaran foot passenger services  departing Split every day in the late afternoon (line 9608) and stopping at Prigradica (2 hours from Split) on the north coast of Korcula island before continuing to Korcula Town (two hours 45 minutes from Split) and a daily service departing early morning from Split and arriving in Korcula town after 2 hours and 50 minutes with stops on Brac island and at Makarska on the mainland along the way.

If you choose to drive from Split to Korcula you can drive down the coast towards Dubrovnik before taking the car ferry crossing from Ploce over to Trpanj on the Peljesac peninsula, followed by a short drive across the peninsula to Orebic from where you can take the car ferry over to Korcula (Domnice). See below for details. The crossing from Ploce is 60 minutes and there are seven crossings a day in peak season. Unless the ferry times work well for you it may be quicker to drive further down the mainland coast and then turn off to drive up the length of the Peljesac peninsula to Orebic. Either way the journey from Split airport to Orebic will take over three hours.

Flying to Dubrovnik Airport offers the greatest flexibility and is probably the best solution if you are staying near Korcula town at the east end of the island. From Dubrovnik airport it is a two hour scenic drive up the coast and along the length of the Peljesac peninsula to Orebic from where there is a 15 minute ferry crossing; either by foot passenger only ferry which docks right at the entrance to Korcula old town, or by car ferry which docks at Domnice  which is 5 minutes drive from Korcula town. The car ferry runs every 60 to 90 minutes in the summer season with the first crossing at 05.30am and the last at around midnight. The foot passenger ferry runs non stop from 9am to 5.30pm during the summer.

There is foot passenger only fast catamaran ferry that runs daily from Dubrovnik to Korcula town.  The service is provided by Kapetan Luka with departure from departure Dubrovnik (Port of Gruz). One route is via Pomena on Mljet and the other via Sobra on Mljet. They both depart at either 16.00 or 16.30 depending on the season. Journey time is just under two hours and the cost of a ticket around €19.

We can quote for car hire from Dubrovnik centre or airport or for pick up in Korcula town.

Split Airport is located to the west of Split close to the town of Trogir. It is 25 minutes drive from the airport to the ferry port in Split although you should allow longer in mid summer.

Dubrovnik Airport is located near the town of Cavtat 19km to the south of Dubrovnik. There are direct flights to Dubrovnik from most European countries and from Philadelphia in the USA.

There are bus and taxi services into Dubrovnik centre. A taxi transfer can be expected to cost around 35 to 40 euro one way depending on the time of day and the season and a minibus around 50-60 euros.   A shuttle bus service from the airport to Dubrovnik is 7.5 euro per person each way.